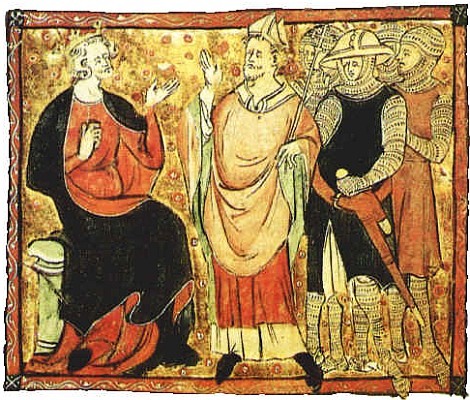 Return of the Archbishop: Thomas Becket lands in England

On 30 November 1170, that is 850 years ago today, Thomas Becket set sail for England from Wissant in the county of Boulogne. On 1 December he landed at Sandwich in Kent. He had not set foot in England for six years following his clash with King Henry II and subsequent exile. He came back to a mixed reception. Becket’s biographers play up the warmth shown to him by the commoner sort, others set out the openly hostile welcome afforded by royal officials. Clearly, the divisions of the last six years had not been completely smoothed over in the village of Fréteval in France.

What was needed at that time from the king and from Becket was statesmanship. Henry had been magnanimous at Fréteval and while he had since been dilatory in returning Becket’s properties and revenues, no one could accuse him of acting in bad faith. Henry had been distracted by affairs of state in northern France and had also fallen seriously ill. Becket, on the other hand, evidently had revenge in mind. Even before he set sail for England, he had sent a servant across the Channel to publish sentences of excommunication against the bishops who had challenged his authority and who had offended him. Immediately upon his return to England, he set off on a visitation of the diocese of Canterbury and he began to discipline the monks at Christ Church in the city. Becket did nothing illegal: he absolutely could act in this way. Whether he should have, however, is another question altogether. His behaviour in the final months of 1170 was tactless, petty-minded, confrontational and provocative. What purpose did he think these actions would serve, beyond redeeming his wounded pride and reasserting his weakened authority? There was plenty of time for due recompense in all these matters; there was no need to be so rash. This imprudence culminated in an astonishing performance in the cathedral at Canterbury on Christmas Day. There, preaching to the faithful from the pulpit, Becket excommunicated all those who violated the rights of the Church and those who stirred up discord in the kingdom. A little self-awareness here would not have gone amiss. He also proclaimed sentences against those who had been involved in the coronation of the Young King in June 1170. Long before Christmas, however, Roger, archbishop of York, Gilbert, bishop of London, and Jocelin, bishop of Salisbury, had crossed to Normandy to complain to Henry about Becket’s actions. They were not the only ones who brought news of Becket’s troublesome behaviour to the king. The question thus became, what would Henry do in the face of provocation such as this?