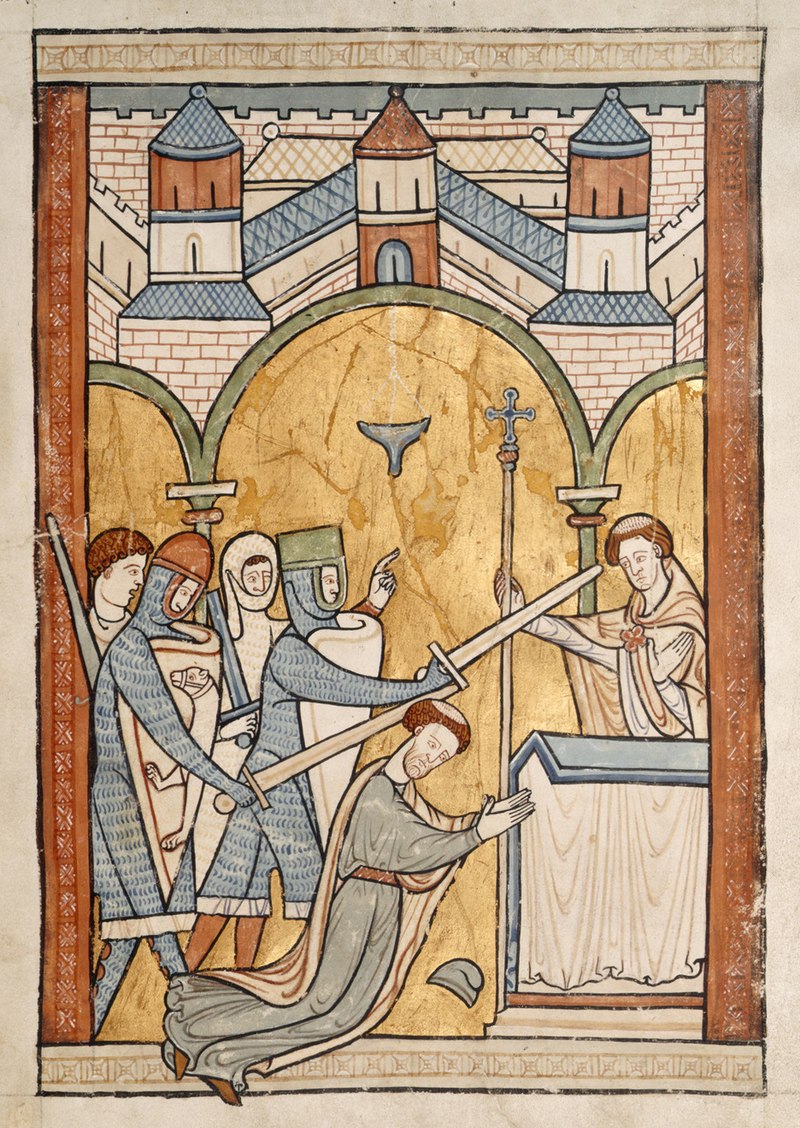 As King Henry II passed December 1170 in Normandy, France, he began to receive reports of Thomas Becket’s inflammatory behaviour in England. Because many of our sources for the denouement of the quarrel between Henry and Becket are contradictory, the exact sequence of events is hard to reconstruct with certainty. It seems that Henry, although a man famous for his temper, was not provoked to anger – initially at least. Rather, he decided to send a party of men, led by William de Mandeville, earl of Essex and constable of England, across the Channel to remonstrate with Becket and, should Becket refuse to change course, then to arrest him. We do not know precisely when this party set off, but it arrived after 29 December 1170. Equally uncertain is the exact point in December at which Henry finally exploded in anger – it may even have been on Christmas Day. It is also far from clear why Henry finally went into a rage; perhaps someone brought him a report of Becket behaving particularly egregiously, perhaps Henry was in his cups at the time. Nor can we be sure of the specific words that Henry let fly. He may have asked whether anyone would rid him of his turbulent priest; he may equally have rebuked the members of his household as ‘miserable drones and traitors’ who ‘let their lord be treated with such shameful contempt by a low-born clerk.’ For all the uncertainties above, the outline of events is clear. From several independent sources, Henry heard of Becket’s activities in England. At first composed, towards the end of the month Henry lost his temper and uttered some words that he would later have cause to regret. Then, having heard the king’s outburst, four of his knights. William de Tracy, Reginald Fitz Urse, Hugh de Morville and Richard Brito slipped away from the king’s court and, travelling by different routes, they reached Saltwood Castle, Kent, on 28 December.

What did the four knights hope to achieve? It appears that they wanted to force Becket to moderate his behaviour and to absolve the bishops he had recently excommunicated. Well, good luck with that. For six years Becket had stubbornly and unyieldingly refused to change under pressure from his own bishops, his king and his pope. What made these four knights think they would be more successful in this endeavour? What would they do if, as was almost certain, Becket refused their demands? The truth is, that they set off to win royal favour but without royal sanction and without, too, a clear plan of action at all.

They arrived at Canterbury Cathedral at around two o’clock on 29 December, shortly after Becket had finished dining. The meeting, in one of Becket’s chambers, soon descended into an acrimonious and pointless recapitulation of the arguments of the preceding years. Becket’s biographers provide us with a picture of an archbishop patiently, skilfully and bravely countering the wild and whirling accusations of the knights’ spokesman, Fitz Urse. While we should be wary of uncritically accepting that portrayal, it seems more than likely that these men were no match for Becket in an argument. The knights thus turned to the large crowd that had gathered in the chamber, calling for assistance and demanding that they help in arresting the archbishop – all in vain. At this point, perhaps between three and four o’clock, events appeared more likely to descend into farce rather than to end in murder.

Becket returned to his Cathedral – perhaps of his own volition to hear vespers, perhaps pushed there by his clerks. Alive to the present danger, his clerks urged Becket to bar to door to the Cathedral. Becket, however, refused, telling them that ‘it was not proper to make a fortress of the house of prayer’. Becket was not stupid, he must have realised that his life was in peril, and yet he refused either to hide behind a locked door or to flee, rather he turned to face his opponents as they burst into the Cathedral. What did he hope to achieve? Did he think that his opponents would ultimately shrink from using violence in the Cathedral? Did he seek martyrdom? Certainly, according to one of his biographers, Becket declared that he was ready ‘to die for my Lord, that in my blood the Church may obtain liberty and peace’, while another noted that he could have fled if he had wanted to, but that he chose to stay instead. But Becket was nothing if not brave and obdurate, and it is just as possible that he simply declined to give way to men he thought his social and intellectual inferiors. A further explanation is that offered by W.L. Warren, who suggested that Becket may even have come to the realisation that his own death was the only way now to resolution. At this remove there is no way of telling, of course, but it is difficult to imagine how the quarrels between Becket and Henry, and archbishop and his own bishops, could have been meaningfully and lastingly settled. Surely, too much water had passed under the bridge.

For whatever reason, Becket remained in place as most of his clerks fled. The knights approached him and tried to drag Becket out of the Cathedral, but he fought back and insults were hurled on both sides. The struggle became confused and in the commotion a sword blow sliced Becket’s crown. As he fell to the floor, the knights began to hack at his head and body, spilling his brains onto the floor of the Cathedral. At about four o’clock, when the light would have been fast-fading, Archbishop Thomas Becket died in his own Cathedral.

The murder of an archbishop in a cathedral would cause widespread revulsion in our modern, more secular age. It does not take much to imagine the disgust at the time of Becket’s murder. Henry and his son, Henry the Young King, were both horrified, but many held Henry partly responsible. Churchmen quickly put distance between themselves and the king, while chroniclers criticised Henry for his part in the tragedy. Within a week, there were reports of miracles wrought by Becket’s blood and a cult had taken root at Canterbury. Praise flowed from the mouths and pens of Becket’s friends and clerks, praise which was seized upon at the French and papal courts. By the end of January, Henry’s lands in France had been laid under an interdict by the archbishop of Rouen; as soon as Pope Alexander III heard the news, in March 1171, he excommunicated the killers and their supporters, and before long Henry himself was under a personal interdict. Less than two years later, on 21 February 1173, Alexander canonised Becket at Segni. But, by this time, the interdicts had been lifted and Henry, having expressed contrition and remorse for his part in the tragic murder, had been absolved by a pope who needed the support of the king and who was, too, perhaps relieved that the dispute had been brought to an end – however unfortunate that end had been. Henry himself was clever enough to realise that there was little to gain by swimming against the tide of popular opinion; indeed, he had lent his support, albeit tacit, to Becket’s canonisation. On 12 July 1174, Henry even did penance at Becket’s tomb and was scourged by the monks of Canterbury. He may well have thought it worth the humiliation for, on the following day, his forces surprised the Scots at Alnwick and captured King William the Lion who was, at that time, one of the main protagonists in a rebellion against Henry. The revolt soon subsided and Henry was then, arguably, at the very height of his power. Becket’s murder had cost the king little authority.

In August 1179, Henry met King Louis VII of France and other peers of the French realm at Dover to escort them to Canterbury to pray at Becket’s tomb. By this action, Henry made it quite clear to everyone that Becket was his, and indeed England’s, saint. This Becket undoubtedly was. It would be another two hundred years before St George would seize the English popular imagination and Becket’s shrine at Canterbury was, throughout the Middle Ages, far more popular with pilgrims than those of England’s two royal saints: St Edmund at Bury and Edward the Confessor at Westminster. It was, after all, on the road to Canterbury that Chaucer’s pilgrims met late in the fourteenth century. And nowhere was Becket’s cult more popular than in London. Thomas was, after all, a Londoner. On his first seal he styled himself ‘Thomas of London’, while on the seal of the medieval city of London was a depiction of Becket enthroned and surrounded by praying figures, with the exhortation ‘May thou never cease, O Thomas, to protect me who gave thee birth’ inscribed upon its circumference.

On London’s medieval bridge stood a chapel dedicated to Becket’s memory and thousands of pilgrims who had completed their journeys to Canterbury threw their pilgrim badges into the river Thames close to this chapel. In the city’s medieval cathedral was an altar dedicated to Becket, and on 29 October each year, the newly-elected mayor of London and the aldermen would process along Cheapside from the church of St Thomas of Acre at Poultry to St Paul’s Cathedral, and in the cemetery there solemnly recite the De Profundis by the grave of Becket’s parents. At least, they did until the Reformation when there was a rethinking of almost all traditional religious belief. Becket’s cult was simply too awkward to survive the upheavals of that period. In its simplest form, at least for those who venerated Becket, it was the story of a pious and brave archbishop defending the holy Church against attack from overweening royal power. Well, King Henry VIII was never going to allow that narrative to endure. In 1538 Becket’s cult was overthrown and one year later his image was removed from the city’s seal.

Since then, Becket has remained a recognisable figure, not as a saint or theologian, but as an archbishop who defied his king. The tale of their clash retains its interest 850 years after its unhappy ending, even if none of the several plays, books and films of the story, all of which approach the dispute in very different ways, are especially popular today. Of the two protagonists, Becket is probably the better known also. In that sense, we might even say that he had ‘won’. He was rapidly elevated to the status of national saint, a position he held for almost four centuries. His was easily the most popular cult in medieval England. His death forced Henry to backtrack on the Constitutions of Clarendon and, in 1176, to free criminous clerks from the threat of secular punishment – an exemption which again lasted until the Reformation. But we should not think of this in terms of winners and losers. In medieval Europe, prince and prelate had to find a way to accommodate the power of the other; each needed the other and it was in both their interests to work together. For the most part in medieval England, they did. In that respect, this story was something of an aberration and both men were thus losers. In many ways, too, Becket’s death changed very little indeed. The Constitutions had only been drawn up in response to Becket’s intransigence anyway, so that was hardly much of a victory for the archbishop. Before long Henry was once more meddling in ecclesiastical elections and obstructing appeals to Rome, albeit in more subtle ways. We have already seen, too, that Henry soon shrugged off the political challenges to his rule which followed from Becket’s murder. Becket might be the better known of the two men today, but I doubt Henry, one of England’s most formidable and successful kings, would lose much sleep over that.