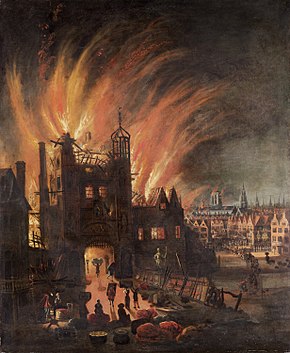 Tuesday 4 September 1666: the worst day of the Great Fire of London

When they woke on Tuesday 4 September 1666, Londoners must have felt like they had spent the last two days in hell. Incredibly, things would get worse before they got better. The king, the duke of York and many of London’s aldermen and governors continued to lead the containment operation from the front, but the fire seemed unstoppable. By the end of this third day, when to Pepys it looked as if ‘the whole [was] heaven on fire’, the firestorm had engulfed and destroyed St Paul’s Cathedral, the Guildhall and Christ Church Newgate, the former site of the Greyfriars Priory and the second largest church in London. All Cheapside had been laid waste, and the fire had reached the western extent of the city’s walls where, as we can see in the picture above, it had consumed Ludgate, Newgate – from the prisons at both of which the inmates had mercifully been freed – and buildings at the eastern end of Fleet Street.

Much more than just structures were lost when buildings such as these were destroyed. Although it had fallen into some disrepair, St Paul’s Cathedral was one of the largest and most beautiful of England’s gothic cathedrals. With its spire reaching almost 500 ft into the air, it was symbolic of London and it was probably the first building seen by travellers to the city. It also represented the power and importance of the Church of England and the bishop of London; its ruin left England’s capital city without a religious and spiritual centre. The Guildhall, the largest civic hall in England, had stood for centuries as a manifestation of the citizens’ political and economic importance in the kingdom. It was not razed completely to the ground, but the damage here was severe and it would need to be almost completely rebuilt. Also lost to the flames at these sites were valuable records and documents. Reams of civic records, for example, perished at the Guildhall. For centuries, London’s booksellers and stationers had lived and worked in the streets surrounding St Paul’s Cathedral. When the fire broke out many of them rushed to place their books in the cathedral’s crypt in the mistaken belief that it would withstand any fire. Who knows what valuable treasures were lost when the flames engulfed the crypt.

Across the city, Londoners did what they could to save their possessions. Fortunately, many smaller archives were saved. On this day, George Dowswell, for example, the master of the Masons’ Company, got to Masons’ Hall, close to the Guildhall, and carried off his company’s records and goods. But there was nothing he or anyone else could have done to save Masons’ Hall, and it was one of forty-four company halls which succumbed to the flames. On the other side of town, meanwhile, Pepys together with Sir William Penn, as is well known, dug a hole in his garden where they buried wine, other items and a wheel of ‘parmezan cheese’.

Towards the end of the day, however, there were the first glimmers of hope. On the advice of the men who worked in the royal dockyards, and at first in the east of the city close to the Tower of London, gunpowder was used to blow up whole streets to create wider firebreaks. Initially, as we can imagine, this frightened many of those still left in the city, but it did stop the fire from spreading. More importantly, late on Tuesday night the wind changed direction and began to blow, as it usually did, from the west. If it continued to blow this way, it would push the fire back over the ground it had already consumed where there was little of no fuel to sustain it, meaning that there was, perhaps, an end in sight to London’s inferno.