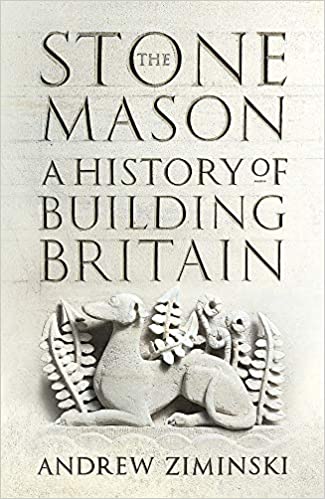 It is undeniably the case that university-educated scholars have been responsible for the majority of written research into the buildings and architectural practices of the past. Consequently, when stone masons have been the subject of academic study, the focus has often been, primarily, on the masons’ intellectual role as designers of the medieval buildings which we see today. We should, of course, be grateful to historians such as Howard Colvin, John Harvey and Louis Salzman for reconstructing the lives and careers of masons, and indeed other craftsmen, and for demonstrating that the master craftsmen in particular were often accomplished designers, architects and artists as much as they were artisans. But we should also remember that while not all masons were masters responsible for the designers of beautiful buildings, they were all skilled engineers who spent years learning the technical skills needed for their craft. Andrew Ziminski is a working stone mason, a William Morris Craft Fellow at the Society for the Protection of Ancient Buildings, and a Fellow of the Society of Antiquaries. There is no doubt, then, that his practical and academic background enables him to bring a fresh perspective to the study of the craft of masonry.

Ziminski’s first book is a cleverly-structured one organized around a series of journeys. Two of these journeys are through time. The first takes the reader through the rhythms of the year beginning and ending on the Celtic festival of Samhain and the Christian feast of All Saints (1 November). Ziminski, who has a good eye for nature, can expressively describe the changing seasons in vivid detail. We read of house martins twittering as they close in on a condensing insect swarm, spiders spinning webs around Ziminski as he sleeps on site, and of his work among bat roosts under bridges. Readers who like studies of the natural environment will find much to enjoy in this work. The second temporal journey is one through the history of building with stone in the British Isles. It begins in a Neolithic chambered tomb and ends with the modern use of concrete. In this way, this book is a very pleasing introduction to a history of architecture in this country which stretches back thousands of years. To be sure, the book is not simply one about the medieval craft of masonry. However, the focus of the majority of the book is on the work of masons in the Middle Ages and Ziminski’s study of ancient and modern building practices do provide useful context for better understanding the work of medieval builders. Ziminski is usually good on historical developments in this field and readers will learn a lot about the factors which shaped changes in architectural practice in Britain. On very few occasions I found myself in disagreement with the author. Perhaps French architectural influence in England did wane at the time of the Hundred Years’ War, but I, and indeed anyone who has read Chaucer, would surely not agree, for example, that at this time ‘England became detached from developments in Europe’ (p. 207). However, for the most part Ziminski is a good guide through the longue durée of architectural history in the British Isles.

The final journey around which the book is structured is his very physical and geographic one around southern England and south Wales working on various stone preservation and conservation (he is very clear not ‘restoration’) projects. Ziminski is fortunate to have undertaken a great range of work: from fixing a newly-discovered piece to a Roman pediment in Bath to repairing the vault of the abbey church of St Mary in Sherborne – with much else besides. Through this approach the reader really does come to appreciate the variety of Britain’s built environment in what is a relatively small area; certainly Ziminski was able to do a great deal of his travelling by canoe. It was interesting to learn about the technical aspects of his day-to-day work which are often described in quite evocative detail. On pages 151-2, for example, we read that Ziminski finds the rhythm of Pump Up the Jam by Technotronic to match perfectly his own natural working rhythm. I enjoy reading this kind of detail which provides a vivid picture of an expert at work. Ziminski is clearly very proficient as a mason and there is much to learn here. At times, he can describe his work in very technical detail and the reader will find the glossary (pp. 295-300) a useful aid. Perhaps some images of the terms explained here would have been helpful.

With its glossary, index and suggestions for further reading the book is a helpful study guide. It is well-written and accessible, although the use of Thomas à Becket rather than Thomas Becket was irritating. Ziminski can often be quite humorous: for example, in his wry description of a modern-day King Arthur, Merlin and their followers passing around a pack of Marlboros while standing in the darkness outside the stone circle at Stonehenge (they refused to stand inside as a protest against the management of the site by English Heritage or, as they prefer, English Heretics) on the feast of the winter solstice (pp. 45-6). This style can, at times, become too journalistic. The occasional political references to an ‘ultra-conservative, heavily policed, walled fiefdom of a former Conservative prime minister’ (p. 112) and to a non-existent ‘Trump casino in Las Vegas’ (p. 277) are simply too contemporary and they will not be to everyone’s taste. These are, however, minor faults and Ziminski is to be congratulated on what is a welcome and engaging study from an author with a unique and unusual background.

The Stone Mason: A History of Building Britain is available to purchase here.