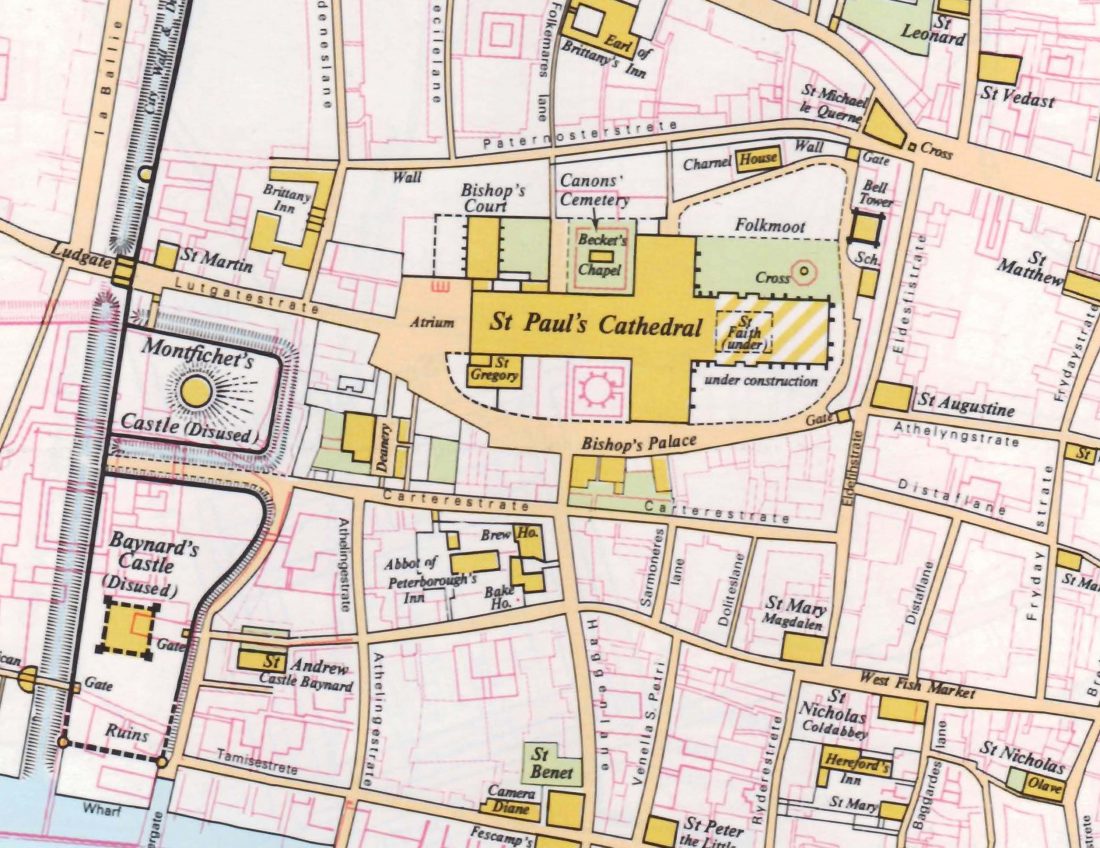 In my previous blog, we saw King Henry III attempt to purge the opposition to his rule in London in 1258. He did this by sending royal officers to the city to enquire into the assessment of a tallage in 1255. These officers were initially frustrated as the leading men of London stood on custom and refused to cooperate with the inquiry. However, the royal officers appealed directly to the humbler London citizens and, as a result, they were able to take the city into the king’s hand, and suspend the mayor, sheriffs and royal chamberlain from office. With the king firmly in charge of the city, the juries now had little choice but to comply and, on 3 February 1258, they began to answer questions, on oath, about the 1255 tallage.

One week later, on 10 February 1258, the royal inquisitions were complete and the king summoned the mayor of London, the sheriffs, all the aldermen, and the jurors to appear before him at Westminster. Then Ralph Hardel, the mayor of London, and five other aldermen (Nicholas Bat of Bishopsgate, Nicholas son of Joce of Broad Street, Matthew Bukerel of Langbourn, John de Toulouse of Candlewick, and John le Minur of Aldersgate) were summoned before the barons of the exchequer, the earls of Gloucester and Warwick, and others of the king’s council. John Mansel, the leading royal councillor, told the six Londoners that the king charged them with ‘oppressing and ruining the city by their counsels’. Specifically, they were accused of favouring their friends in the collection of the tallage three years previously. The men mounted a spirited defence of their actions, in which they again relied on London’s privileges. This was rejected by Mansel who told them to appear before the king himself on Monday 11 February.

Our best account of these events is that provided by the London alderman, Arnold fitz Thedmar who, in addition to holding civic office as alderman of Billingsgate Ward, was also the spokesman of the German merchants in London and author of a chronicle. Arnold tells us that on Monday 11 February, the six accused men appeared before the king, along with two other men also charged with malfeasance: Henry Walemund and Arnold himself. Two of the accused, Hardel and Bat, who had previously opposed Henry in an inquisition held at Windsor, realised the hopelessness of their position and threw themselves on the king’s mercy. The others, however, continued to stand on London custom and demanded the right to clear themselves by having twelve Londoners swear to their innocence (compurgation). The king refused them this and instead ordered Mansel to summon the citizenry to the folkmoot on Tuesday 12 February to ask whether this was indeed the custom of London.

As the crowd grew on 12 February, the six men accused by the king soon gathered that the majority of the citizens were not favourably inclined towards them. They tried to put themselves in the king’s mercy, and asked for an inquiry into their actions, ‘saving their liberties’. Mansel refused point blank and the royal officers appeared before the massed citizenry of London asking whether or not those accused ‘of many evils and injuries upon the citizens and the city’ should be able to clear themselves by compurgation. The answer, unsurprisingly, was no. ‘Nay, nay, nay’ roared the crowd – in Arnold’s words ‘sons of various mothers, many born outside the city and many of servile rank’, and unmindful of the city’s liberties. With this mandate, Mansel ordered all the aldermen, sheriffs and the royal chamberlain to appear before the king in Westminster Hall on the next day, Wednesday 13 February. On this day, the king held a council with his leading advisers in St Stephen’s Chapel, where it was decided to arrest all the aldermen of London and to remove them from their offices. Once this was done, they were granted bail and sent away. Subsequently, almost all the aldermen of London who had not been charged with any offences were allowed to recover their wards, upon election. The eight aldermen who had been charged with malfeasance, however, were prevented from recovering office, even though, in Arnold’s words, not one of them ‘was proven to have offended in any way’. Instead, new aldermen were placed in charge of seven wards, while the new mayor, William son of Richard, a royalist, retained control of Arnold’s ward of Billingsgate. Arnold pulled no punches, asserting that he was only charged by the malice of others rather than because he had deserved it any way.

Arnold’s account of these events, which is unique in its scope, rather peters out at this point. He tells us that he was recalled to favour and exonerated on 5 November 1259, but says little of what became of the inquisition. Arnold does tell us that in November 1259, the king also recalled Matthew Bukerel. Nicholas son of Joce and John le Minur to favour, but that Ralph Hardel, Nicholas Bat and John de Toulouse had already died by this point. A search of the records of London’s court of Husting shows that Hardel and Bat’s wills were both granted probate on the same day: 5 May 1259. According to Matthew Paris, Hardel died of a broken heart thanks to his treatment by the king.

Perhaps one reason why Arnold’s account of these events peters out, is that the investigation itself petered out. A failure of the harvest in the autumn of 1257 led to widespread famine in 1258 and many thousands died in the towns of England, whither they had moved in search of food. Perhaps the inquisition was suspended during this emergency. It is more likely, however, that the investigation finished when King Henry’s Personal Rule collapsed at the end of April 1258. At that point an armed delegation of barons, frustrated by Henry’s mismanagement of the realm, marched in on the king and imposed upon him a programme of reform that went much further even than Magna Carta in its scope. For the next five years, the country would see various schemes of reform be proposed and neutered, before open rebellion would break out against the king in 1263, leading to a destructive period of civil war which would only come to an end in 1267. During this time of reform and rebellion, the Londoners would provide the king’s opponents with some of their most valued and valuable support. If Henry’s aim was to purge the opposition to his rule in London in 1258, then, in this way at least, it was a complete failure.