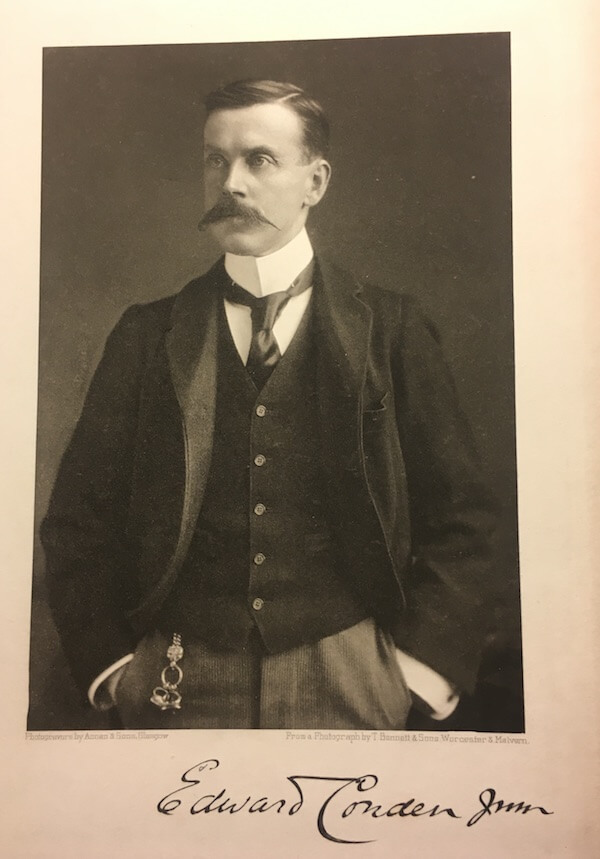 Edward Conder and the history of the Worshipful Company of Masons

On 12 January 1893, twenty-two members of the Court of Assistants of the Worshipful Company of Masons gathered at the Hotel Metropole in London. The final item on the agenda of this quarterly meeting concerned the Company’s records and the minutes of the meeting note that the Clerk of the Company, Mr R. L. Hunter, was authorized to ‘lend the records, books and documents of the Company to the Renter Warden, Mr Edward Conder junior, upon his undertaking to return the same in good order, the Court expressing their interest in the work undertaken by Mr Conder of investigating the Past history of the Company.’ Plans to write the Company’s history were clearly afoot. In June 1893 Conder’s father, Edward senior, proposed that fifty copies of this forthcoming work be purchased by the Company at 15s. each for presentation to individual members, for which £37 10s. 0d. was set aside on 5 October. In January 1894 Edward junior reported that he hoped to publish his book in June, but that it might not be ready for a further few months. Whether the book was indeed ready by June 1894 is not clear. Certainly, on 28 June 1894, the date on which Edward junior was installed as Master of the Company, it was unanimously agreed by the Company that a copy of the book ‘be presented to each Member of the Company and that a label be attached thereto bearing the name of each Member and the fact of presentation with the signature of the Master at the foot.’ Whether by June or not, Conder’s Records of the Hole Crafte and Fellowship of Masonswas printed in 1894. An enigmatic text reprinted in facsimile edition in 1988 by the Masonic Book Club, it is still the only monograph which attempts to cover the history of the Masons’ Company from its emergence in the Middle Ages to the modern era.

Edward junior had been born to Edward senior (1829-1910) and Susanna in January 1861 in Shoreditch, where he spent much of his childhood. The Conder family originally hailed from Kirkby Lonsdale, then in Westmorland but now in Cumbria. The first impression which one forms of the family is that of local gentry: the family home was easily the largest in the village and the Conders had held land there in direct succession since the reign of King Henry VIII; indeed, in the parish church of St Mary’s at Kirkby there is a memorial plaque recording the names of various Conders, almost all of whom were called Edward, from Edward (c. 1486-1542) to Edward Conder senior. Perhaps, then, it is surprising that in 1844, aged 14, Edward senior travelled to London where he was bound as an apprentice mason to William Piper, and that at the census of 1851 he is described as a journeyman carpenter. Be that as it may, he completed his apprenticeship, was admitted to the freedom of the Company by servitude in 1857 (the first of the family to join the Company), and he subsequently went on to become a successful building contractor responsible for the employment of hundreds of men. Indeed, so successful was he that, on 19 January 1884, he was able to enter into a contract to rebuild Freemasons’ Hall in London following a fire there in 1883 for the handsome sum of £4,559. He served as Master of the Company in 1877. Later in life he retired to Herefordshire where he lived a comfortable existence with his family and several servants.

Edward senior’s success in business meant that Edward junior was freed from the obligation to work. As such, he could devote his energies elsewhere. He read engineering at King’s College London and in 1879, at the age of 18, Edward junior was admitted a student of the Institution of Civil Engineers. On several occasions during the 1880s he went on grand tours of Europe and north America to study architecture. But he seems never to have pursued either engineering or architecture as a career. ‘Profession: gentleman’ records his 1887 marriage certificate. At the time of his marriage he was living in Romford, Essex, but by 1891 he was living with his father in Herefordshire, where he indulged in amateur farming, sat as a county magistrate, and took great pleasure in riding to hounds. Notwithstanding his removal from London to live a life of bucolic gentlemanly ease, Edward junior continued to be involved in Company affairs. He had been admitted to the freedom and livery of the Company by patrimony on Friday 4 August 1882; he was subsequently elected to the Court of Assistants in October 1885 and as Renter Warden in June 1892.

It was to his antiquarian researches, however, that Edward junior was most devoted. Archaeology was one discipline which appealed to him and he was admitted as a fellow of the Society of Antiquaries in 1895; he read papers there and before the Cumberland and Westmoreland Archæological Society. However, his greatest interest – and one which seems to have developed quite suddenly – was in the history of freemasonry. He was initiated as a freemason, on 6 December 1892, into Bowyer Lodge, no. 1036, in Chipping Norton, Oxfordshire. His father was not a freemason at that time – he was initiated as a freemason on 9 February 1893 – and there is little evidence that, prior to that point, freemasonry had much interested Edward junior. Almost immediately Edward junior joined the Correspondence Circle of Ars Quatuor Coronati, the leading Masonic research lodge, to which he was elected as a member on 5 January 1894. He was subsequently Worshipful Master of this lodge in 1900 and, between 1896 and 1901, he presented no fewer than eight papers at its meetings. Edward junior died on 27 July 1934 and maintained throughout his life a close interest in the history of freemasonry.

It is unclear how the Hole Crafte landed with other members of the Company upon its publication in 1894. No vote of thanks was recorded in the minutes of the Company and at the end of his term Edward junior was afforded only the customary vote of thanks ‘for his able and successful conduct in the chair during his year of office’. In 1906 the Company purchased another 100 copies at 11s. each, and in 1909 Edward junior sold his remaining stock of twenty-two bound copies and seventy-five sheet copies to the Company at 7s. 6d. and 6s. per volume respectively. In subsequent years the Company made good use of these copies, sending and presenting them as gifts to individuals and institutions in London. They may even have made a tidy profit on the remainders, having resolved in 1916 to sell them for a guinea each upon application.

Edward Conder was an energetic man of wide interests whose efforts among the Company’s records unearthed much. However, what the Hole Crafte is not is a history of the Worshipful Company of Masons. Conder’s researches into the Company’s history took place at a time when his passion for the history of freemasonry was first taking hold – indeed, permission was given for him to borrow the documents of the Company’s archive just fiveweeks after his initiation as a freemason. This is the context in which his book must be placed. ‘Masonry, or Freemasonry’ reads the subtitle to the introduction on the first page proper of his work, which rather sets the tone for the next 250 or so pages as Conder repeatedly returns to possible connections between operative and speculative masonry. It is only on page 252, having reached the formation of Grand Lodge in 1717, that Conder felt able to sum up that ‘having thus briefly[!] sketched the rise of modern Freemasonry, I now leave it, as having severed its connection with the Masons Company, it no longer concerns this history.’ He then rattled through the history of the Company 1717-1894 in just twenty-nine pages. This final section reads rather as if Conder had simply ran out of energy – or perhaps interest.

In the 124 years since the publication of the Hole Crafte a great deal of literature has been produced on the livery companies of London. The Masons are one of the oldest such companies and of all the craft workers of London’s history, it is masons who have left the greatest collective mark on modern London’s physical environment. But while the history of building in stone has been the subject of much excellent research, the masons as a corporate institution have been somewhat neglected by modern historians of London’s companies. One reason for this is because the Company lacks a proper corporate history. it is time that this was put to rights and I am both honoured and pleased to have been given the opportunity to do so.