Share
Ian Stone, historian | Lest We Forget? Recovering the story of a little-known memorial
710
post-template-default,single,single-post,postid-710,single-format-standard,ajax_updown,page_not_loaded,,select-theme-ver-4.4.1,side_area_uncovered,wpb-js-composer js-comp-ver-5.4.7,vc_responsive,elementor-default 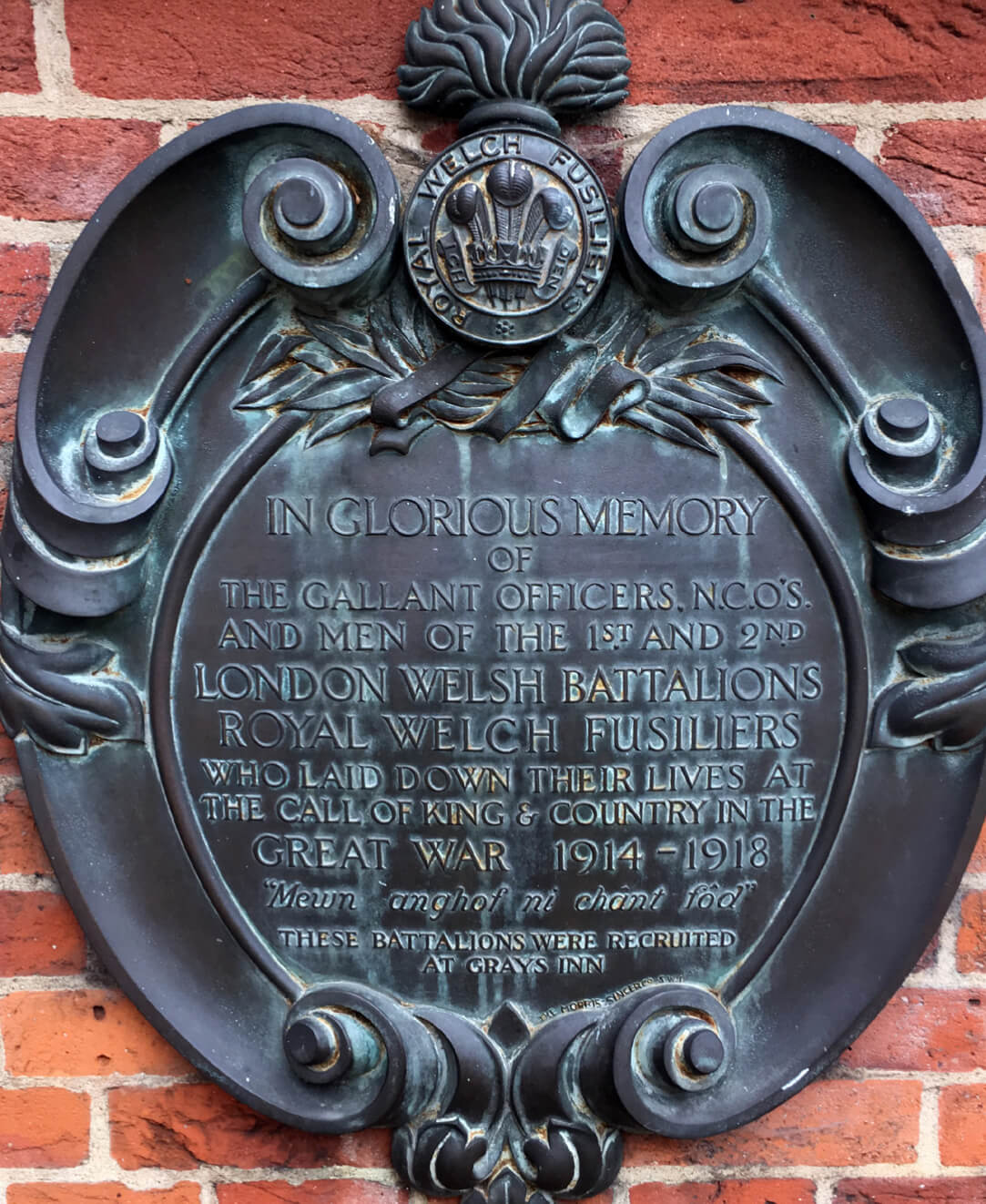 Lest We Forget? Recovering the story of a little-known memorial

Located on a wall in the north-east corner of Gray’s Inn Chapel, at Gray’s Inn Square, is a small memorial to the men of the 15th and 18th Battalions Royal Welch Fusiliers, aka the 1st and 2nd London Welsh, who were killed during the Great War. In total 4,285 men enlisted in these two battalions, of whom 506 were killed in action or died of wounds. The men are remembered here because they were recruited and trained at Gray’s Inn. Indeed, Gray’s Inn Gardens was turned into a barrack square, where as many as 900 men would sometimes muster, drill and train. Each Remembrance Sunday, the men of the London Welsh are added to those commemorated on the Chapel’s Memorial Board.

Recently, I wrote something about this memorial for the Institute of Historical Research’s Layers of London project. My interest in this memorial developed when I learnt that my great, great-uncle, Bill Hoare, had joined the London Welsh in December 1914. Many of the recruits to the regiment were Welshmen living in London or men who could claim Welsh descent, but there were many, too, such as Bill, who had no Welsh connections whatsoever,

Finding out general information about the battalions was easy enough: the 1st London Welsh Battalion was formed in autumn 1914 to recruit men for Lord Kitchener’s New Army; the 2nd London Welsh Battalion was formed in February 1915 as a service battalion. The 1st Battalion spent most of 1915 training in Wales and on the South Downs before leaving for France on 1 December 1915, when the men went to the trenches of northern France and remained there or the first half of 1916. As part of the Somme offensive, the men of the Battalion took part in the attack on Mametz Wood from 10-12 July 1916, a site that witnessed some particularly fierce fighting. The Battalion was then disbanded in February 1918.

Finding out about the memorial was a harder task. The Inn’s archivist and the staff at the chapel were all very helpful, but no one knew much about who had placed the memorial there and when this had happened. Less than half a mile away from Gray’s Inn Chapel is the London Welsh Centre, the staff there knew nothing of the memorial either. In the end, we were able to find an entry in The Times newspaper describing the unveiling of the memorial by Lieutenant-Colonel Sir Charles M Dobell, Colonel of the Royal Welch Fusiliers on Sunday 30 June 1929, at a service of dedication led by the Archbishop of Wales and Rev H E Lewis. Among those who attended the service were Judge Ivor Bowen KC, who played an important role in the formation of the battalions, and Mr and Mrs Lloyd George. The article noted at the end that at the conclusion of the ceremony, both national anthems were sung, with ‘Land of my Fathers’ being sung in Welsh. The Welsh inscription, commonly found on memorials in Wales, is best translated as ‘they shall not be forgotten’.

The Layers of London project aims to create a database of entries that encourages others to pay attention to, and hopefully think differently about, the environment around them. It seemed to me that this overlooked memorial, one of so many disregarded features of London’s topography that we all walk past on a daily basis, was exactly the sort of object which should be added to the website.