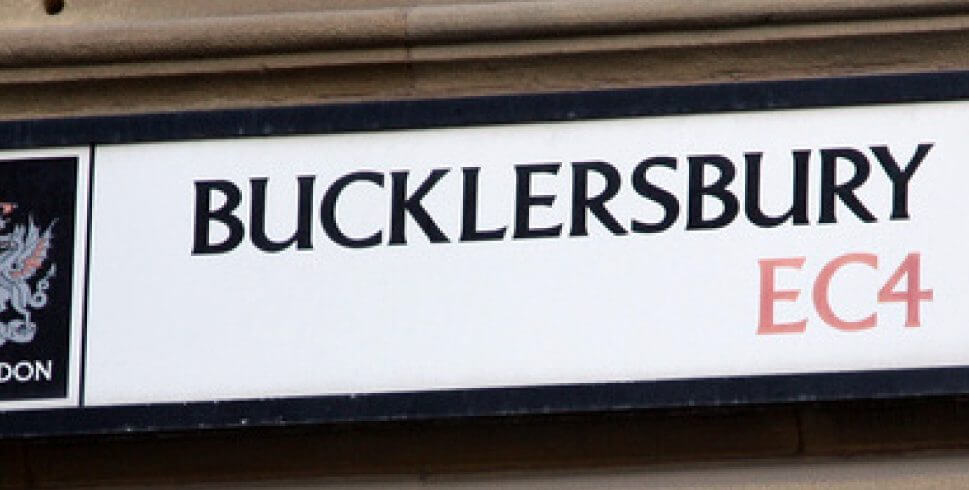 How did Bucklersbury, London, get its name?

In my previous blog I wrote about the newly re-opened London Mithraeum on Walbrook in the heart of the City of London. Walbrook is so named as it sits almost on top of the now-subterranean river Walbrook, which played an important historical role in dividing medieval London into eastern and western halves. It now plays an equally important role, albeit in a very different way, attached as it is to London’s sewerage system.

Joining Walbrook to Queen Victoria Street is the small street ‘Bucklersbury’. Now reduced to a small thoroughfare little more than 150 feet long, this street is bounded on one side by the wonderful new Bloomberg headquarters and on the other by the City of London Magistrates’ Court. In the late sixteenth century, however, this street was considerably longer and was, according to John Stow, ‘on both the sides throughout possessed of Grocers and Apothecaries.’ The air along the street would, then, have been filled with the aroma of the numerous spices and herbs, and it must have been one of the most fragrant quarters of the old city. Indeed, when Sir John Falstaff ‘woos’ Mistress Ford in The Merry Wives of Windsor, he claims, with all his customary insincerity, to be an artless man who does not ‘smell like Bucklersbury in simple [that is, summer] time’. Stow’s Survey of London is an outstanding work by a remarkable man, but it is not without its mistakes, and one of those was Stow’s supposition that Bucklersbury was so-called because of ‘Buckle that sometime was owner thereof.’ In fact, the name Bucklersbury, first recorded in the 1270s, preserves the name of one of the most prominent families in twelfth- and thirteenth-century London: the Bukerels.

The most famous member of this family was Andrew who died on 20 October 1237. His father, Andrew senior, was a twelfth-century Londoner who was appointed by Henry II as one of the custodians to govern the city between 1172 and 1174. These years were the time of the greatest crisis of Henry’s reign and this appointment must speak to the king’s trust in Andrew senior’s loyalty and competence. Andrew senior died c.1183 while on a pilgrimage to the Holy Land, leaving a widow, Idonea, and at least four surviving sons, Andrew junior, Stephen, Thomas and Walter. All four brothers would achieve either fame or infamy in thirteenth-century London. Andrew junior, however, would become the most prominent of all Londoners during the first half of the thirteenth century.

When Andrew junior was born is not known. His first known appearance in the historical record came as a witness to a grant at Holy Trinity Aldgate which might predate 1193. Perhaps, then, he was born in the 1170s. Between 1200 and 1221 he appears several times in the records of government supplying the royal court with cloth, furs, wax, saffron, pepper and wine. By 1220, if not before, the king’s `dear and faithful` Andrew had been appointed as royal chamberlain and in the same year Andrew, along with two others, paid £604 to help cover the expenses of Henry III’s coronation at Westminster. One year later, Andrew helped pay the expenses incurred by messengers of the widow of Richard the Lionheart, Queen Berengaria. Andrew seems, therefore, to have become very rich through trading contacts with the court. In this respect his career was absolutely typical of many contemporary London merchants. Certainly, Andrew’s trading connections spread wide: in 1227 he appears delivering wine from Gascony to the court; in 1230 we see him trading hides in Yorkshire; and in 1232 he was locked in a dispute with the men of Sandwich over eighty-two tuns of wine shipped from Europe.

Just how wealthy Andrew had become from all this commerce is shown by a payment he made in 1221 to hold the lucrative position of Master of the Royal Exchanges of London and Canterbury for three years. This position had three main responsibilities. The Master oversaw the exchange of foreign coins and bullion for English silver pennies; he minted pennies, at that time the only coins in circulation; and he produced revenue for the king from what were the two significant mints in the country. No wonder that for a position such as this Andrew was willing to offer the Crown the sum of four-thousand marks (£2,666). In fact, before the year was out Andrew’s debt was cancelled. This may suggest that Andrew had friends in high places willing to act in a role of patron. Perhaps even the king’s powerful justiciar, Hubert de Burgh, who was one of Andrew’s pledges for the sum, was one of these men. Certainly, between 1224 and 1227, under Hubert’s watch as justiciar, the men of Winchelsea, the barons of the Cinque Ports, and the sheriff of Yorkshire were all ordered to refrain from troubling Andrew and his merchandise.

But Andrew rose to the greatest prominence through holding political office in London. By 1220 he was an alderman of an unknown ward, perhaps already of Cripplegate Ward; certainly, he was alderman of that ward by 1227. He served as sheriff of London from 1223 to 1225, following in the footsteps of his brother Thomas (1217-8) and preceding another brother, Stephen, who fulfilled this role from 1227 to 1229. On the feast of St Simon and Jude (28 October) 1231, Andrew achieved the highest municipal office in the country when he was elected as mayor of London, an office he held continuously until his death in 1237.

Whatever the exact nature of the relationship between Hubert de Burgh and Andrew in the 1220s, Andrew was the mayor of London who, in 1232, was ordered to seize his former acquaintance Hubert de Burgh as he fell from power. Matthew Paris, the greatest historian of his age, wrote that the Londoners rejoiced at Hubert’s fall, for they had not forgotten the part played by Hubert in the summary execution of the London alderman, Constantine son of Athulf, following a riot in July 1222. Indeed, Andrew’s brother Walter was forced to abjure the realm after being implicated in this riot. Subsequently, a dispute would break out between the king and Londoners, in 1244, when a judicial inquiry discovered that Walter was living in the city, leading to the imprisonment of Walter, the fining of the citizens, and the suspension of London’s liberties. Whether, in 1232, Andrew rejoiced in the fall of his former acquaintance is unclear, but Andrew did lead an investigation which, in 1234, restored to Matthew Bukerel, a kinsman of Andrew, some land which had previously been taken by Hubert. At other times during his mayoralty Andrew was also a participant in moments of great drama, both on the municipal and national stages. In 1234, for example, Andrew was the mayor who oversaw the dismissal of Simon son of Mary, later a controversial figure in civic affairs, from his office of sheriff; he was ordered to be present as a witness when Peter de Rivaux was removed as treasurer; and he, along with others, conducted an enquiry into the affairs of Rivaux and Robert Passelawe.

As others fell, Andrew stayed in favour. Without doubt, he must have been a successful politician. Indeed, in London, only three men have ever served longer consecutive terms than Andrew’s six-year spell as mayor. We have seen, too, that Andrew was equally successful as a merchant, and that he had already amassed a substantial fortune before his political career took off. Holding political office would have, too, provided opportunities for Andrew to acquire wealth, wealth which he used to finance the acquisition of land and properties, both within and without London. Throughout the 1220s and 1230s Andrew appears in the records acquiring properties in Milkstreet in London; Rowell in Northamptonshire; Oxsted in Surrey; Delce in Kent; and in St Pancras, West Bedfont, Kentish Town and the parish of St. Giles without London, all in Middlesex.

It is not known whether Andrew ever married nor if he had any children. Certainly, he left no issue. He was succeeded as alderman in his ward by his brother, Stephen, and in his lands by his nephew Thomas, son of his brother Thomas. A deed from the 1270s records that this Thomas had held property in ‘Buckerelesbury’, providing the earliest known evidence of the Bukerel family giving their name to the area which had been home to the family’s estate for over a century.